As noted in a recent article, WebAssembly adds a powerful new suite of tools to the Web development workshop. In particular, WebAssembly clears a path to running software written in arbitrary languages within a Web browser securely, and at near native speeds. Unfortunately, taking advantage of this new potential is non-trivial given that it requires expertise in both Web technologies and traditional build systems.

This article, the first in a series, shows how to compile a real-world C codebase to WebAssembly. Specific problems and general solutions are highlighted. In the end, the entire process will reveal itself to be much simpler than it might appear on the surface.

This first installment will show how to create an HTML page and associated assets that rather boringly runs the main InChI function and then promptly exits. Future installments will grow a dedicated library that can be called from a JavaScript running in the browser or Node.js.

The WebAssembly standard describes a binary instruction format that has been implemented by all major browsers since 2017. The aim of this standard is to provide a browser-embeddable, universal compile target that executes at native speed.

The idea of a browser-native universal compile target has been around for a long time. In the late 1990s, Java was viewed by many as the obvious choice. A multitude of mistakes, technical and political, rendered this idea unworkable. In 2013, the first possible replacement began to take shape the form of asm.js. Asm.js is an optimizable subset of JavaScript that as the name suggests can be used as a kind of assembly language. Although it executes faster than JavaScript, asm.js suffers from sub-optimal parsing speed and large file size. WebAssembly represents a backward-compatible reformulation of asm.js that can be parsed and encoded more efficiently. As such, tooling designed to generate asm.js can be adapted to also produce WebAssembly.

Emscripten transforms LLVM compiler output to both asm.js and WebAssembly. LLVM enjoys broad support as a compile target, meaning that any language that can be reduced to LLVM can in principle be further compiled to WebAssembly. A few years ago, I showed how to compile the InChI chemical identifier software to asm.js using Emscripten. With the more recent support of WebAssembly by all major browsers, it's time to update that work with an exhaustive description of how to compile InChI to WebAssembly.

I approached this project with four main goals:

This article focuses on Goal (1), compilation of unmodified InChI source. Subsequent articles will focus on the remaining three goals.

The following tutorial assumes you've installed and activated the latest version of the Emscripten toolchain in your current environment. It also assumes you're running Mac OS, although other unix systems might work as well.

My company maintains an unofficial InChI source code repository here. Clone and make it your working directory. Alternatively, download from the InChI site.

Although the InCHI repository contains makefiles, they're too tightly coupled to be useful for the purpose of cross-compilation. Instead, we'll need to devise a simple way to get the C compiler to build InChI's main function.

In the interest of keeping the InChI repository itself clean, create a build subdirectory and change into it:

Error-driven devlopment is a powerful way to learn new techniques. The idea is to begin with the simplest possible idea, no matter how unlikely to work. Then, using the error messages that result, figure out how to get to the next error. Continue until you either exhaust all errors or paths forward.

The simplest idea would be to invoke the C compiler directly on the file containing InChI's main function. It can be found at INCHI_EXE/inchi-1/src/ichimain.c. Attempting to compile ichimain.c directly gave:

conio.h is a MS-DOS header. Given that I'm compiling on a MacOS system, the error is to be expected. Searching the source for the text "conio.h" offers a clue. Starting on line 48 of the file INCHI_BASE/src/ichiparm.c, for example, we find:

This suggests that we can move past the error by setting the COMPILE_ANSI_ONLY flag. This can be accomplished by updating the build command:

Doing so generates the new error:

Now would be a good time to point the compiler to its required headers. Browsing through the INCHI_BASE/src directory reveals it to contain many header files. We can include them with:

Again a new error. This time we're notified that:

For this build we're targeting an executable. We can let the compiler know about this choice with the following:

Running the updated command yields another error, but this time more cryptic than before:

The warning Undefined symbols for architecture means that the compiler failed to locate required functions or data structures. We've already included the header files from INCH_BASE/src but we haven't tried to compile any of the implementation files. We can fix that with:

No errors! Listing the contents of the working directory yields a new file, a.out. This is the binary executable. For now, delete it.

We're almost there. All that remains is to generate a binary with a more descriptive name than a.out. This can be accomplished with the following change:

Having developed a command for compiling InChI using using the native compiler puts us in excellent position to cross-compile to WebAssembly. Be sure the Emscripten toolchain is installed and activated in your current shell. Then simply change the command (from cc to emcc) and destination (inchi to inchi.html):

On MacOS you're likely to see the following error:

__isascii is yet another a Windows-only API used by InChI. It's far from clear why the IUPAC team included multiple platform-specific dependencies by default in its build. Fortunately, it also provided workarounds.

Searching the source tree for the text __isascii reveals a hint in INCHI_BASE/src/util.c. Starting on line 47, we find:

Executing this command produces three files: an HTML file that can be run in a browser; a JavaScript bootstrap file; and a wasm file containing the InChI source compiled to WebAssembly.

Testing in a Browser

At this point we're ready to test the generated WebAssembly. If you open the inchi.html file into your browser directly, you're likely to be greeted with a hung progress spinner and something like the following error:

The problem is that security constraints prevent modern browsers from opening resource files from pages loaded with the file:/// protocol. We can work around this limitation by running a web server. A convenient lightweight server available on most systems is Python's SimpleHTTPServer. Execute it in your working directory with:

This server allows us to test the WebAssembly output by opening the inchi.html file. For example, if your server runs on localhost:8000, point your browser to http://localhost:8000/inchi.html. Doing so should yield the following window: 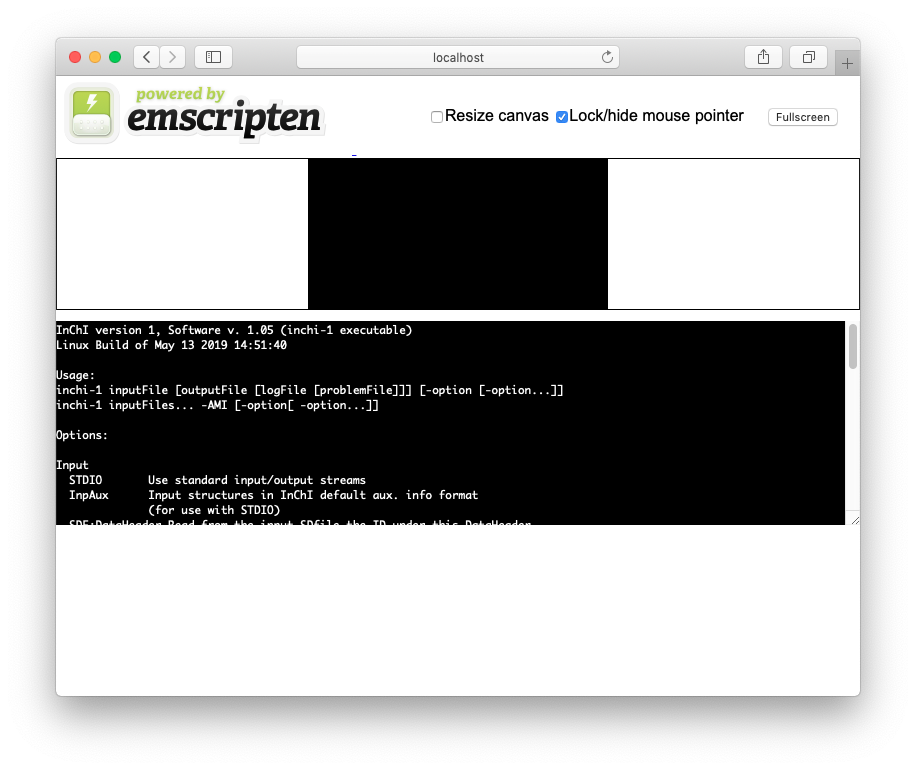 There it is: InChI running in the browser!

But we're still not done yet. Although the main function has been called, no arguments were passed and the runtime promptly exited. InChI's help output has been displayed but nothing else. Much more interesting would be to obtain an InChI identifier from an arbitrary molfile interactively from the browser console or a JavaScript program.

This article presents a step-by-step procedure for cross-compiling a representative C codebase to WebAssembly using Emscripten. Although there are a few small complications to pay attention to, the procedure for generating a native binary looks almost identical to the one for generating WebAssembly. As such, the instructions here should serve as a model for cross-compiling other C codebases.

For the moment, the result isn't much to look at. The next post in this series will show how to create a full-blown JavaScript API that generates InChIs from molfile strings.