A fingerprint is a useful kind of low-resolution molecular representation. Fingerprints come in a many forms and have been applied to a diverse range of problems over the last few decades. Extended Connectivity Fingerprints (ECFPs, or "Circular Fingerprints") offer a number of advantages over other schemes. This article describes the structure and generation of ECFPs at a high level.

ECFPs were first introduced in 2000 with the release of Pipeline Pilot. A 2010 paper by Rogers and Hahn described the generation of ECFPs in detail.

A Little About the Morgan Algorithm and SMILES Canonicalization

The core idea behind ECFPs traces its origin to the Morgan algorithm. This algorithm seeks to assign a unique, sequential atom numbering for any given molecule. Unique atom numbering underpins all widely-used methods for molecule identification, including those used by InChI and the CAS Registry.

The Morgan algorithm takes place in two phases, the first of which is the enumeration of all atom assignments (numberings) obeying the following rules:

This procedure continues until all atoms have been labeled. The result is a set of atom assignments, each one containing a unique numbering. For example, the molecule:

A similar procedure is used to generate unique SMILES via the CANGEN algorithm. In this case, however, the initial value assigned to each atom accounts for the following atomic invariants:

These properties can be conveniently encoded as integer values. In this article these values will be referred to as "atom identifiers," although the term used in the CANGEN paper is "invariant." For example, the atoms of pentane can be encoded according to the following scheme:

The next phase of the CANGEN algorithm follows a pattern analogous to the second stage of the Morgan algorithm. The initial integer identifiers are iteratively replaced with new ones derived from neighbor identifiers until a stable assignment of labels results.

The terms "extended connectivity" and "circular" hint at an underlying connection between ECFPs, the CANGEN algorithm, and the Morgan algorithm. Namely, each atom in a molecule can be viewed as the center of a radius of perception or "orbit." Information about an atom can be iteratively gathered by first examining immediate neighbors, then the neighbors of those neighbors, and so on.

However, the algorithm to generate ECFPs differs from the algorithms for Morgan/CANGEN in two important ways:

What is an ECFP? 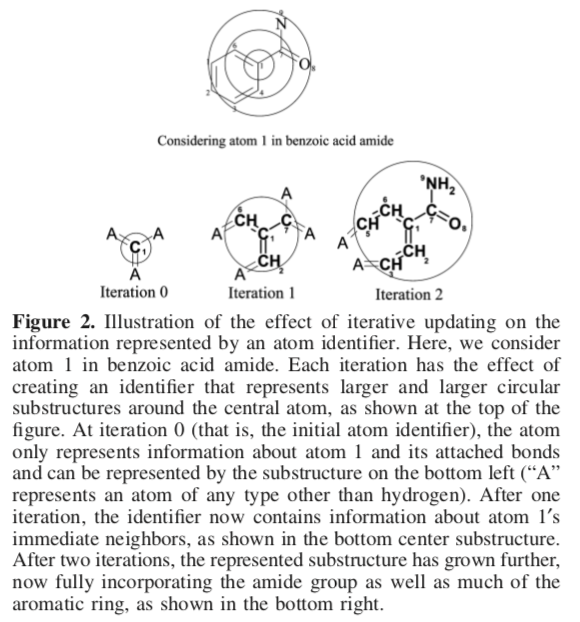 As such, an ECFP atom identifier can be considered as a special kind of substructure key. Here, "substructure" refers to a central atom and its neighbors grouped by distance to the center. The presence of a key suggests that the corresponding molecule contains the substructure producing the key.

Atom identifiers can be stored using any convenient method. For example, some applications might use a set-like data structure such as the ones offered by the Set class found in ES6 and Python, or Java's java.util.Set implementations. Alternatively, probabilistic binary data structures such as Bloom filters and the like may also be used.

Simple ECFP algorithms can be developed from this description alone. For example, we might base ECFPs on atomic mass. In Step 1, we store the mass of each atom in a molecule within a set. This set becomes the Iteration 0 ECFP.

An Iteration 1 ECFP can be prepared by continuing the algorithm. To the already-obtained set of identifiers we add another group consisting of the sum of a central atom's atomic mass and the mass of its immediate neighbors.

We can iteratively continue to add identifiers up to any arbitrary radius of perception n. Notice that with increasing n, each identifier carries information about atoms ever further away from the central atom.

The simplified algorithm described in the previous section omits a lot of potentially useful information. In practice ECFP atom identifiers will be derived from a much wider assortment of properties than just atomic mass. Below is an ECFP generation algorithm that can handle arbitrary atom and bond properties.

But the situation changes for the next iteration (n=1). Here, two new atom identifiers are generated. The first uses the carbon atom as the center of the radius of perception. The second uses oxygen.

Although two unequal atom identifiers are generated at this stage, they nevertheless cover the same set of atoms and bonds. Adding both identifiers to S doesn't increase the set's descriptive ability. For this reason, a method is needed to identify and either count or eliminate the structurally equivalent identifier.

Rogers and Hall outline a procedure that can be used to prevent structural duplication. Each atom identifier added to S is associated with the substructure giving rise to it. Before a new atom identifier is added, its occurrence among the current members of the set is checked. If no match is found, the new identifier is added. Otherwise, a two-part procedure is used to decide which structural duplicate will be kept: 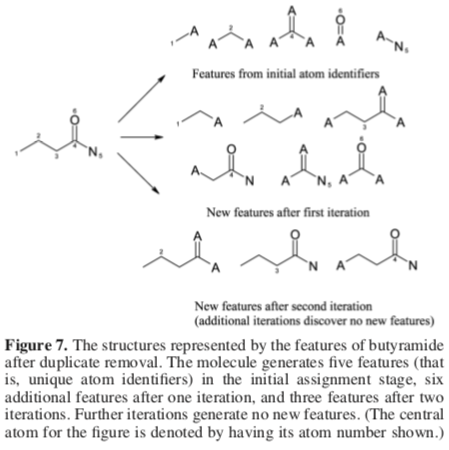 Rogers and Hahn have this to say on the subject of the hash function to be used:

We do not describe the particular hash function used in our calculation because any "reasonable" hash function can be used, and the scientific validity of the results is equivalent. What is most important is to have the hash function map arrays of integers randomly and uniformly into the 232-size space of all possible integers; without uniform coverage, the collision rate may increase, leading to a loss of information. …

In other words, all that's needed is a hash function capable of generating identifiers evenly distributed over a sufficiently large range.

A good candidate is one of the cyclic redundancy check (CRC) functions such as the widely-used CRC-32. This hash function was first explicitly documented by Alex Clark for use in the Chemistry Development Kit's circular fingerprint implementation.

CRC-32 returns a signed 32-bit integer given an arbitrary byte array. Implementations are available for most languages. For example, the CRC-32 Node JS package works as follows:

Like any fingerprint implementation, ECFP requires special attention to resonance forms. In particular, it's essential to generate the same ECFP for all resonance forms of the same molecule. Two conceptual approaches are feasible:

Of these two approaches, (2) appears the most practical. For example, two changes to the bond-specific algorithm outlined above would eliminate resonance form degeneracy. First, ensure that the atom invariant computation includes an atom's degree of unsaturation. Second, replace Step (6) with:

As the previous section illustrates, the base ECFP algorithm lends itself to modification. One of them, "Functional-Class Fingerprints" (FCFPs), is described in the paper. Rather than basing the original atom identifier on CANGEN properties, a six-bit code is used in which setting a bit indicates the presence of a "pharmacophoric" property:

A similar approach could be used to assign atom identifiers based on the presence of other feature classes, including graph properties (e.g., ring membership, hydrogen count, or stereochemical configuration), or physical properties (e.g., pKa, electronegativity, isotopic mass).

Given the ease with which new ECFP variants can be created, a systematic method of naming them is helpful. Pipeline Pilot developed a two-part naming convention. First, a four-character base algorithm identifier is chosen. Two have already been mentioned (ECFP and FCFP). Others include SCFP (Sybil atom types) and aLogP atom codes (LCFP). The second part is a number obtained by multiplying the final radius of perception n by 2. The two parts are separated by an underscore ("_") character. For example, an ECFP accounting for atom type only would be called "ECFP_0." An ECFP including nearest neighbors would be called "ECFP_2," and so on.

ECFPs offer three features rooted in their construction that make them especially useful compared to other options: