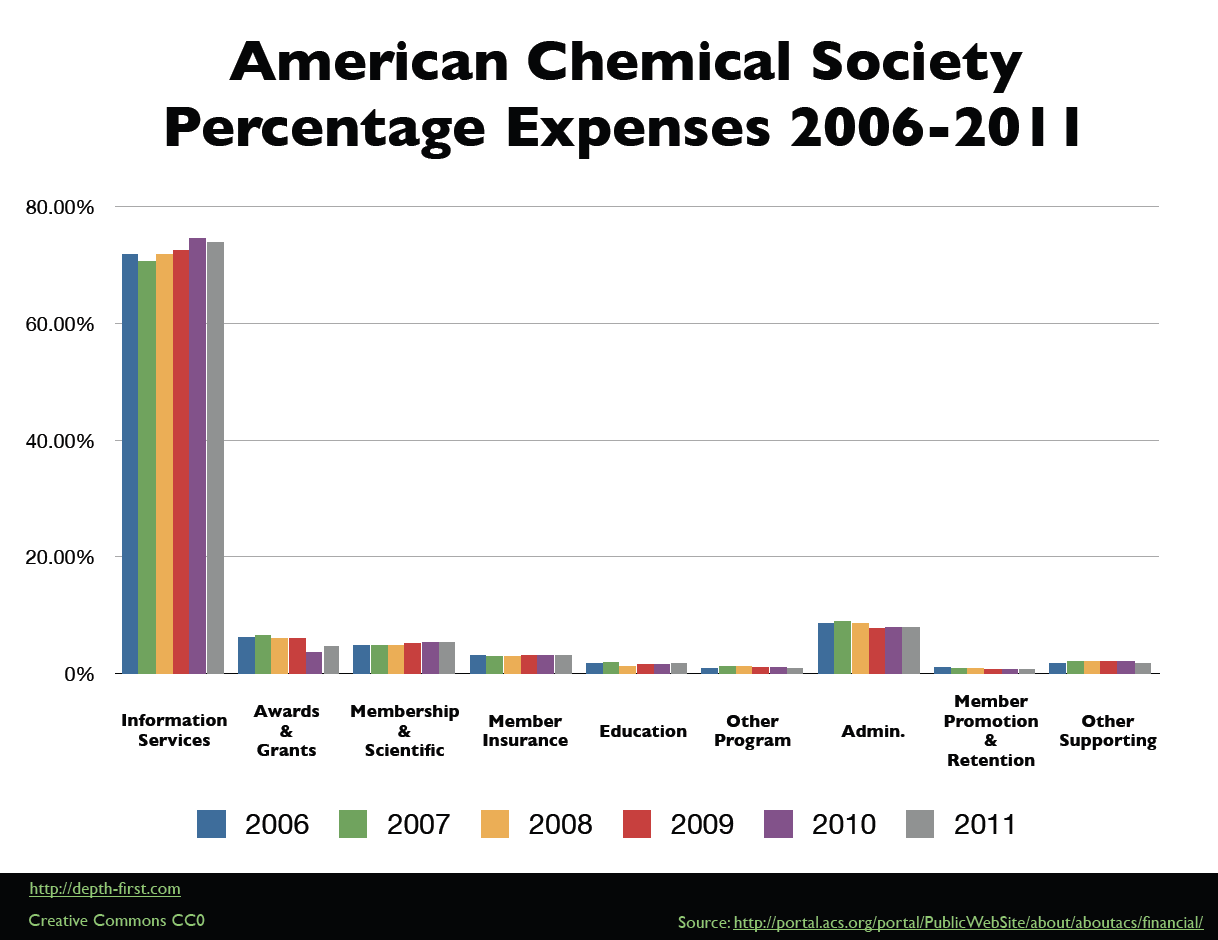 The chart was compiled from American Chemical Society (ACS) audited financial statements for the years 2007-2011.

For ACS income over the same period, see the preceding post in this series.

Where it All Goes

For those familiar with ACS, two things stand out: (1) "Information Services" comprise an eyebrow-raising 70-75% of annual ACS expenses; and (2) ACS' much-talked-about "Education" programs consistently total less than 2% of ACS expenses.

The next biggest expense in the ACS budget is Adiminstrative, consistently around 8%. For comparison, the American Red Cross is reported to have an administrative expense percentage of 4%.

Roughly tied for third place are "Grants and Awards" and "Membership and Scientific Advancement". Although Grants and Awards seems straightforward enough (these are constantly discussed in the pages of C&EN and at ACS events), what goes into the category of "Membership and Scientific Advancement" is not so clear. Both of these categories together have consistently totalled around 10% of ACS expenses over the years.

Given the outsized proportion of revenues from "Electronic Services" and "Print Services", it shouldn't be surprising that ACS expenses fall overwhelmingly into the "Information Services" category. Although exactly what constitutes an Information Services expense is anybody's guess, the most likely candidates would be charges related to ongoing maintenance of Chemical Abstracts Service and ACS Publications.

How Much Money Do Chemical Abstracts Service and ACS Publications Earn?

How much money does ACS actually make from publication and information services? That's a tough question. A very rough estimate can be obtained by subtracting "Information Services" expenses from the sum of "Electronic Services" and "Print Services" in any given year. For 2011, the difference was +$59.8 million ($403.8 million + $10.3 million - $354.3 million).

By this crude (and flawed) method we can estimate that last year ACS generated about $59.8 million in 'profit' (a margin of roughly 12%) from ACS publications and Chemical Abstracts. This money was then redistributed througout the organization in various ways.

Inflows and outflows of money often paint a picture of an organization's values, a view that may or may not apply to ACS. Regardless, ACS' financial statements make it clear that member activies take a back seat to publishing and information services - both in the top and bottom lines.