The study of chemistry is an inherently social activity. From the papers we use and cite, to the conferences we attend, to the informal discussions we engage in daily, being a chemist means interacting with your fellow chemists. Yet strangely, most chemical information systems either totally ignore this central fact, or provide only the most meager of tools to harness it to its full potential. This article discusses how Chempedia currently integrates the social with the scientific, and what may be in store for the future.

Chempedia as a Tool for Scientific Collaboration

A Simple But Possibly Useful Feature 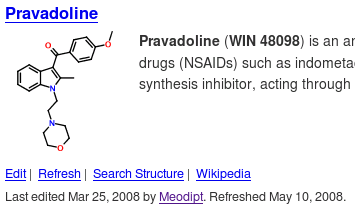 Clicking on the link takes you to the Wikipedia users page, in this case the one for Meodipt. (Wikipedia users frequently use handles rather than their given names.) From Meodipt's page, we can see that s/he received degrees in chemistry and pharmacology and is currently studying law. Meodipt's interests include pharmacology, chemistry, law, and science. We can also see that Meodipt is maintaining a good-sized list of CAS numbers for drugs, grouped by indication.

We might be curious about what Meodipt found worth changing, and how s/he changed it. We could do so by first clicking the Chempedia edit link. In the Wikipedia box (framed by the red dotted lines), we would then click on the 'history' tab. Clicking on the 'last' link for the top entry shows us exactly what Meodipt changed on Pravadoline's compound monograph (also visible through this link).

Linking a real person to changes in a Compound Monograph could be enormously useful, if done properly. After all, bringing people with highly focussed interests together is the essence of scientific collaboration. The Chempedia/Wikipedia combination provides one way to do that.

As Chis Anderson puts it, "social networking should be a feature, not a destination." Scientists were social networking long before the Internet, the computer, and the telephone were invented; indeed scientists who fail to connect with their fellow scientists have a difficult time of prospering. When seen from this perspective, it's surprising that good 'social networking' features would not be viewed as a top priority in chemical information systems.

The Chempedia author credit system in its current form is rather simplistic and may not actually promote scientific collaboration at all. But it's not hard to imagine ways to make it far more effective. Future articles will discuss some of the possibilities.