For far too long Ruby has lacked a development environment that supported important features developers in other languages now take for granted: code completion; refactoring; platform-independence; and speed. Although NetBeans may not spring to mind when thinking of Rails IDEs, it should be at the top of the list for anyone interested in the subject.

Getting started with Ruby, Rails and NetBeans is as easy as downloading the installer and running it. If you later decide to add Java support to your installation (which is also excellent), that can be done by downloading and running the Java installer. You'll end up with a single IDE that supports both languages.

Although other IDEs support some form of Ruby code completion, NetBeans takes it to another level. Can't remember the exact name of the method you're looking for? Type the period and let NetBeans look up both the name and documentation for you: 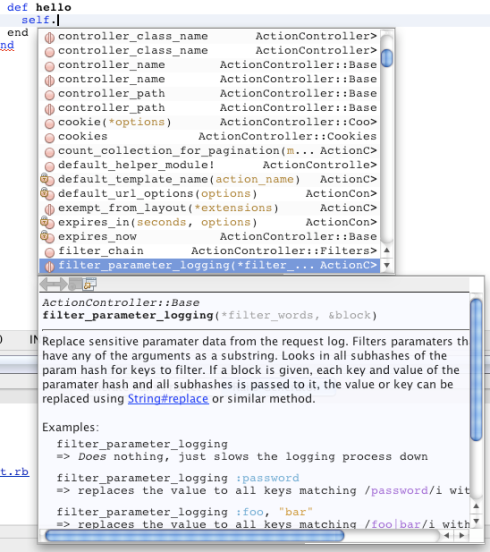 Hitting return enters the method and creates a template for parameters and any needed blocks.

One of the things that makes Java such a powerful language for large projects is the refactoring support offered by most IDEs. NetBeans brings this power to Ruby. Need to rename a class, method, or variable? Let NetBeans do it for you:

There's much more to NetBeans 6 and Ruby/Rails than what's been shown here, including formatting/highlighting for JavaScript and CSS, user-definable Ruby/JRuby interpreter, and menu-based script execution. Whether you're looking for a way to get started with using Ruby and Rails or a way to become more efficient at it, NetBeans 6 is well worth the time.