A vivid example of the pitfalls of sticking to the conventional game plan in times of change occurred in [American] football just after the turn of this century. In 1905, football was a low-scoring game of running and kicking. Guys in leather helmets and a smattering of padding plodded down the field toward the goal line. The offense consisted of formations like the "flying wedge," in which seven players ran together into the middle of the opposition in the hope of gaining three or four yards at a time. It was a tough, gritty game.

Then, in 1906, the forward pass was legalized, making it possible to gain 40 yards with the flick of a wrist. During the fist season, however, most teams stayed almost entirely with their conventional, tried and true running game.

Recognizing that they were entering a new era in which the old strategy of "three yards and a cloud of dust" would fast become obsolete, St. Louis University's coaches adapted quickly, switching to an offense that used the forward pass extensively. That season they outscored their opponents 402-11!

I'm normally not one for sports analogies, but this one just seems to fit so well.

Somewhere around 2005, science was a low-scoring game of trying to get the most publications into journals nobody had the time or money to read. The first-line offense consisted of "The Communication", which was often combined with the "Salami Slice". Not content to work just one channel, guys and gals clad in business suites toured the country trying to get attention and funding for the research few followed. Their most effective weapon was the much-feared "PowerPoint Slide." It was a tough, gritty game. 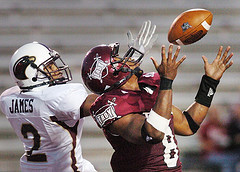 Then, in 2006, a few scientists discovered, more or less by accident, that new, virtually free technology enabled the direct publication of their scientific findings. It was now possible to interactively reach an immediate, worldwide audience through the world's most powerful computer networks and search engines. All it took was a tap of the "Enter" key. During the first season, however, most scientists stayed almost entirely with their conventional, tried and true game.

Information technology has changed the rules of the scientific game. Most players are still acting as if nothing has happened. How long will you continue to follow the pack?