Recently I stumbled upon a new service called The Scientific Debate by way of a comment on Derek Low's blog In the Pipeline. It's actually a very clever idea: think Digg for biology papers. Business seems to be slow right now, but the site is less than one month old. 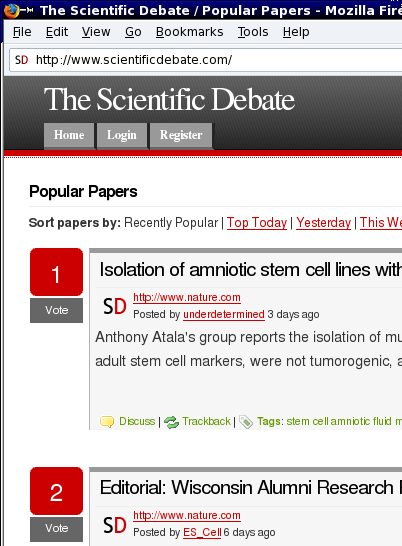 Would something like this work in Chemistry? Sites like Postgenomic Chemistry and Chemical Blogspace already provide an intriguing window into what scientists themselves think of their literature. The blogs (and their numerous comments) demonstrate the willingness of large numbers of scientists to do this kind of work for free - not unlike CAS's long-gone all-volunteer abstracter department. Given that submitting a paper to a Digg-like site and offering a few sentences is much faster than writing a blog, maybe the idea would catch on if done right.