Molbank is an Open Access collection of single-compound articles on synthetic chemistry. Previous articles on Depth-First have highlighted Molbank's practice of including machine-readable molecular representations of its content, and its very liberal policy on mirroring and robots. In this article, we'll take advantage of both of these features to build something that was left out of Molbank: a graphical table of contents.

The Graphical Table of Contents (GTOC)

The Molbank Graphical Table of Contents (Molbank GTOC) is available online. It consists of a single Web page containing a grid of color 2-D chemical structures representing the contents of Molbank. Each structure is hyperlinked into the Molbank site itself. Clicking on the structure takes you to the complete synthetic procedure and characterization data. 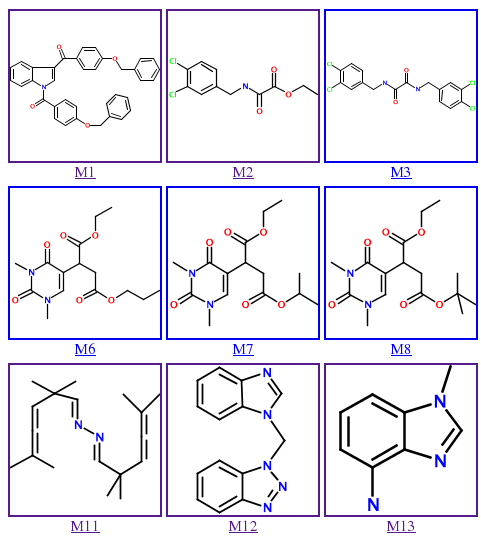 To run this project, you'll need Ruby CDK. A recent article described the small amount of system configuration required for Ruby CDK on Linux. Another article showed how to install Ruby CDK on Windows.

The complete source code for this project can be downloaded from RubyForge. A subdirectory called demo contains the pre-built final result.

After unpacking the molbank-0.1.0 archive, the demo application can be run:

Several problems were uncovered while building the Molbank GTOC. This is to be expected with any data produced "in the wild" rather than within the safety of an Ivory Tower. Here are the main categories:

After cataloging the problems that exist with the Molbank dataset and the software used to mine it, two interesting questions come into focus:

The Ruby Molbank GTOC generator works by connecting to the www.mdpi.net server to get its data in real-time. Internally, the software creates a map of the Molbank website so that the molfile (and URL) for any article can be retrieved on demand. Each readable molfile is used to create a 2-D image using Ruby CDK. As a final step, the index.html page is generated, linking the 2-D images to a specific URL for a Molbank article. This file is produced with eRuby using a previously-described technique.

Building a Graphical Table of Contents for Molbank is not that difficult given the power of Ruby, and Molbank's forward-thinking attitude toward mirroring and robots. In working on this project, several problems were uncovered, both with Molbank's data, and the software used to mine it.

In some ways, the software described here and its output are less interesting than the larger questions they raise:

These and many related questions are waiting just around the corner. As Open Access becomes more viable, both technically and commercially, look to Open Source and Open Data to provide the synergies that will unlock its true potential.