The previous tutorial in this series showed some techniques for improving the appearance and usability of a simple cheminformatics Web application. That application, Depict, rendered color images of 2-D molecular structures when given a SMILES string. Still, something is missing. Wouldn't it be better if the application responded to individual keystrokes in the input field, rather than waiting for the user to hit the return key? In this tutorial, we'll see how to quickly accomplish this effect with a technology called "Ajax."

In addition, you'll need to install Ruby on Rails - something that can be done through RubyGems.

If you'll be running Depict on an AMD64 Linux system, you'll need to prepend your invocation of script/server with LD_PRELOAD. For example, on my system running Sun's JVM, the full command looks like:

A Brief Introduction to Ajax

When stripped down to its essentials, Ajax is nothing more than an asynchronous communication channel between Web browsers and Web servers. In the pre-Ajax model of client-server Web interactions, a browser would make a request to a server and then wait until getting a server response, which would take the form of a complete Web page. In the Ajax model, a browser makes a request to a server, continuing to function while the server generates a response, which takes the form of a small section of the page that gets replaced. For this reason, Ajax-enabled Web sites are far more application-like than the document-centric sites that preceded them.

Ajax is implemented in JavaScript using the HTMLHttpRequest object, although working at this level can require a lot of code to do anything meaningful. Fortunately, Rails and other Web application frameworks provide high-level interfaces to Ajax. In Rails, Ajax support takes the form of a variety of helper methods, one of which we'll use in this tutorial: observe_field. This method, an instance of the Observer Pattern, assigns an Observer to monitor input activity in a text field.

The Problem at Hand

Let's start by adding an observer to Depict's input field. These changes will occur to the SMILES View, contained in depict/app/views/smiles/depict.rhtml:

Making these changes and refreshing the browser window gives a screen like the one below: 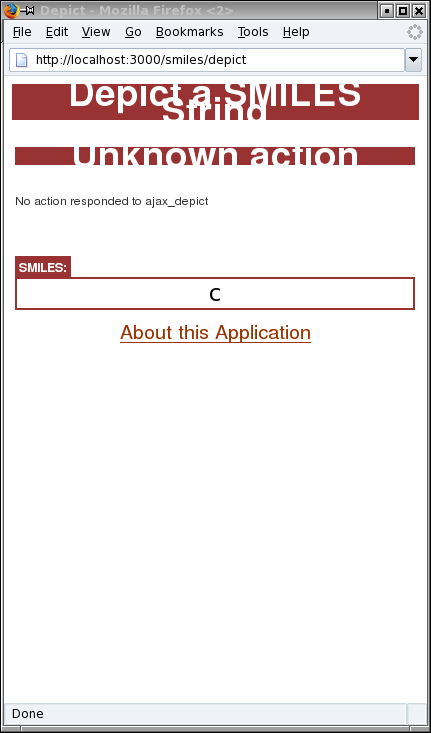 Although the client side of the Ajax communication channel is working, the server side is not. Let's fix that.

Depict needs an Action and View that will be invoked in response to keyboard events in the SMILES input box. To do this, first add a new ajax_depict method to SmilesController, the source for which is found in depict/app/controllers/smiles_controller.rb:

Making the above changes and refreshing your browser should give an error message: 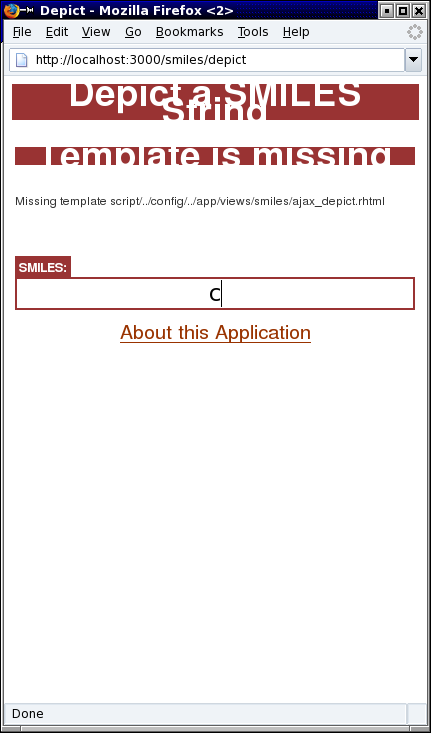 The new ajax_depict method is being called, but no associated template exits. This template contains the HTML that will be inserted into the div with the results id attribute that we set up in Step 1. We can resolve the error we're getting by simply creating a new file (depict/app/views/smiles/ajax_depict.rhtml) containing the following partial template:

Now, refreshing your browser should produce a screen like that shown below. We have now Ajaxified Depict, but we're not quite done yet. 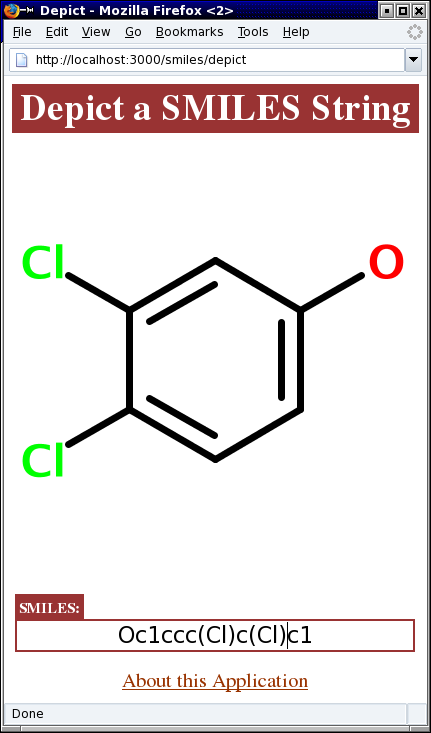 As you type a SMILES string into the input window, you may have noticed the input box being repositioned toward the top of the application window just prior to the display of a new image. This is due to the image area being resized to zero height as the new image is generated.

Fortunately, the fix is simple; we'll just specify that the image area must be 400 pixels high, whether an image is being displayed or not. This is done by editing the image selector in the CSS file at depict/public/stylesheets/default.css:

Refreshing the Depict window should now give a statically-positioned SMILES input field.

As it stands, if the user presses the return key, they will see the "Enter SMILES Below" message. This is due to the change in the way SMILES strings are transmitted into the application. To fix this problem, we simply change the way that SmilesController assigns the smiles instance variable (depict/app/controllers/smiles_controller.rb):

Making this change produces an interface that will render the correct image whether the return key is typed or not. If JavaScript is disabled, Depict will work exactly the same way as it did in the non-Ajax version.

Ajax makes the Web more attractive than ever as an application development platform. In this tutorial, we've seen how using Rails made it very easy to give Depict the feel of an interactive SMILES depiction tool using Ajax. But a few details remain before we're ready to deploy this application on a Web server for the public to use. For example, we need to take server load and network latency into account, and we need to make sure Depict works well on all major browsers. The next articles in this series will address these issues.