How would you enumerate all of the molecules represented by a molecular formula? This question was recently posed to members of the Blue Obelisk mailing list. Formula-based exhaustive structure enumeration may seem on the surface to be just another esoteric problem. Nevertheless, playing with open, interactive software that can perform such enumerations can be a great source of new ideas for applications and unit tests.

The software described in this article will generate a collection of 2-D molecular PNG images based on a user-supplied molecular formula. When viewed in a file browser such as Windows Explorer or Konqueror, the output is visible as a matrix of images. The filename of each image is given by the SMILES string of the corresponding molecule. All molecules are enumerated, whether they look "reasonable" or not. As an example, consider a section of the output for 'C4H8ClNO', which looks like this on my system: 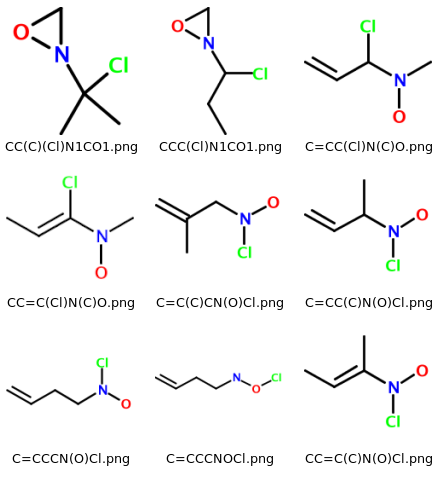 We'll create a small Ruby class to do most of the work. Save the following in a file called enum.rb:

As you can see, this class is nothing more than a thin wrapper around a large amount of CDK functionality. Most of the action happens in the write_images method, where three things take place:

To test the library, the following code can either be entered interactively via Interactive Ruby (irb) or saved to a file and run with the Ruby interpreter (ruby):

Running this code will produce a collection of PNG images in your working directory. By changing the argument passed to the Enumerator constructor, you can change the makeup of the image set.

After testing the Enumerator library, you may notice a new file in your working directory called structuredata.txt. This file is written automatically by GENMDeterministicGenerator on instantiation, providing information on each structure that is generated. The CDK API does not mention the creation of this file, and it would be preferable for this file to only created on request. I'll be submitting a feature request to this effect shortly.

If you plan to explore larger areas of chemical space with the Enumerator library, be prepared to wait. The generation of molecules, determination of 2-D coordinates, and rendering can take some time. Of course, the number of molecules increases dramatically with the number of atoms in the molecular formula - a concrete demonstration of what makes organic chemistry the fascinating discipline that it is.

An interesting variation on the ideas presented here would be to filter out molecules based on some criteria. One approach would be to remove molecules containing reactive functionality such as nitrogen substituted with chorine. A SMARTS pattern search could easily form the basis for this filter. In applying this and similar filters, larger areas of interesting chemical space could be sampled in a reasonable amount of time.

CDK's GENMDeterministicGenerator class, when combined with 2-D structure layout and 2-D rendering, provides the foundation of an intriguing tool for exploring chemical diversity. Further combining this capability with that offered by other freely-available tools offers some thought-provoking possibilities.