Bring on the Code

The following Ruby code illustrates how the InChI for the pesticide fipronil (Regent) can be translated into a PNG image:

Running this code produces the image fipronil.png in your working directory: 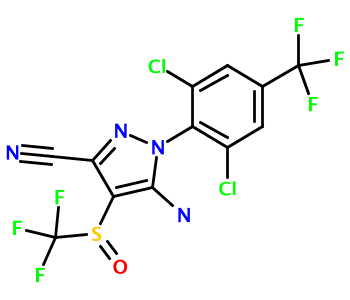 The technique illustrated here is subject to the same limitations as the underlying software. For Rino, this means that stereochemistry is ignored. For RCDK, this means that implicit hydrogen atoms, isotopes, and charges are omitted, and that layout of macrocycles and other complex ring systems may not subjectively appear very refined.

Other Software that Does This

To my knowledge, only one other Open Source package, BKChem, is capable of rendering InChIs as described here. BKChem's underlying InChI translation and depiction software, OASA, can also be accessed online. For comparison, OASA produces the following image for for the fipronil InChI: 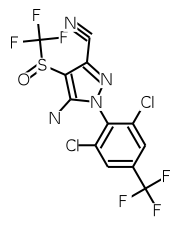 The PubChem editor can also translate and render InChIs, but no source code appears to be available. PubChem's InChI translation and rendering output for fipronil is:

The Chemistry Development Kit, on which RCDK is based, was recently upgraded to support reading InChI identifiers. For some time, CDK has been able to generate 2-D atomic coordinates.

More information on InChI software can be found at Beda Kosata's InChI.info site.

Within certain limitations, it is quite feasible to programatically obtain a 2-D molecular image for any InChI identifier. Combining this capability with other chemical informatics software and services offers numerous possibilities to use InChI in innovative ways.